During the 24th ETRA Conference ETRA hosted the Secretary General and Deputy Secretary General of FEHRL as principal speakers in the Future Roads Panel. It was the occasion to renew an old relationship with FEHRL and to provide the opportunity for future co-operation.

No sooner said than done. ETRA was invited to attend the FEHRL Infrastructure Research Meeting in Brussels on 5-6-7 April 2017. During the three days, we were introduced to many technicians and experts on roads and infrastructure. We spoke about the uses of RTMs in rubberised asphalt, reinforced concrete, rail applications, among other applications. Many of them were already aware of these uses but had no direct experience in using them. They said that they would be very interested to learn more about and to be informed of our next activities on such topics.

It was also a second opportunity to continue the talk with FEHRL about the points of synergy between our two organisations, such as Material Recycling, Research Awareness and Dissemination. The infrastructure sector is a potentially big market for our materials and it is important to expand the possibility to access to it. 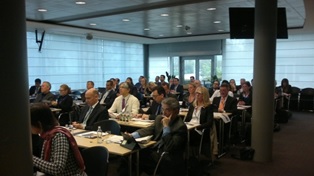 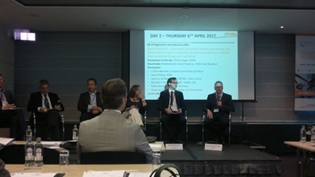 Following tells a little more about the event.

"The future transport system: a public-private enterprise embracing infrastructure and vehicles across all modes"

The FEHRL Infrastructure Research Meeting 2017 (FIRM17), is held every two years and is now in the fourth edition of its current format. For the second time, it is open to all transport modes with speakers and participants from the logistics sector. This key event was held in English and cost only 190 Euros per person (for a three day conference, exhibition entrance and cocktail).

FIRM17 aims to gather around 100 transport infrastructure innovation and research experts, including European and national policy makers, leading industry and SMEs, standardisation agencies and the media. The main highlights of FIRM17 were:

FIRM17 also included a session about the ERA-NET Plus INFRAVATIONprogramme and a mini-exhibition.

We use cookies on our website. Some of them are essential for the operation of the site, while others help us to improve this site and the user experience (tracking cookies). You can decide for yourself whether you want to allow cookies or not. Please note that if you reject them, you may not be able to use all the functionalities of the site.