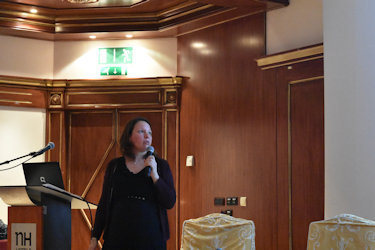 This 23rd annual European Tyre Recycling Conference organised by ETRA at the NH du Grand Sablon in Brussels was remarkable for a number of reasons, not the least of which was the attendance of 130 delegates to the event. A step increase on the attendance at the 22nd Conference and a clear sign that there is a renewed vigour in the approach to tyre recycling issues.

Built around the conference were meetings for Isol Eco and Anagennisis projects, and a pre-event meeting with the ASTM International to familiarize delegates to the proceses and the various ASTM Standards Committees looking into recovered Carbon Black and recycled tyre rubber materials. The ETRA AGM took place on the Wednesday afternoon.

The conference pre-amble was highlighted by the Wednesday evening Cocktail reception and Gala Dinner which gave delegates the opportunity to mix and network, which is one of the key elements of any conference. The conference itself was weighty and many subjects of interest were covered from European funding through Pyrolysis, Devulcanisation, Micronisation, rubberised asphalt and rubber in concrete. 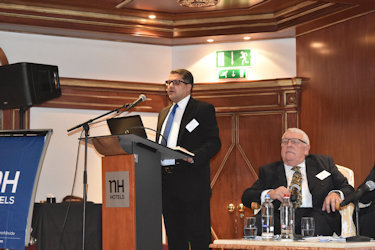 An opening panel Chaired by Peter Taylor OBE, took a view of the way tyre arisings in Europe are quantified and Simon Hodson of Astutus Research from the UK detailed how the count was arrived at.

This was followed by a trip around the world with presentations from Michael Blumenthal, who called for new markets and wider co-operation and communication within the industry. Gaurav Sekhri presented on Tinna Rubber Infrastructure, and the company’s involvement in the rubberised asphalt business in India, where he believes that the current development of the country’s road system should offer huge potential for rubberised asphalt, which has already met with acceptance in several states. Hatem Khater, from the Terous Misr Foundation in Egypt gave an interesting presentation on the state of tyre recycling in Egypt, which it appears is in a very early state of development and is one that his foundation hopes to use to bring wealth and social development to a very deprived community.

There was a certain confidence in the air. Pyrolysis seems to be closer than ever to finding commercial solutions, and devulcani-sation by various means is also close to success with no less than three different projects being presented for commercialisation – Marc Gruffat’s devulcanisation process being joined by Rubreco’s CO2 process, and Sam Visaisouk’s water based process being promoted under the Tyromer banner. 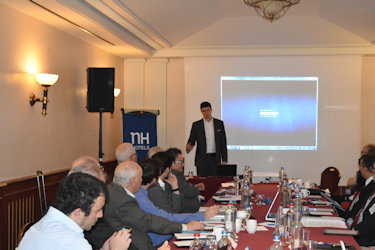 Micronisation also had a panel dedicated to this growing sector of the market. Micronised rubber is said to open doors to new uses and new technologies by increasing the active surface area of rubber material by simply making the particles as small as possible. This enhances their potential for use in many applications such as rubberised asphalt.

The Concrete panel (no pun intended) gave an idea of the potential for the use of tyre derived materials in concrete, from the tyre wire and textile through to various stages of processed rubber to help create flexible of compressible concrete that could be used to develop earthquake resistant buildings.

From the first panel, to the last there were some repeated comments from speakers such as Peter Taylor, Michael Blumenthal, Marc Gruffat and others that the recycling industry needed to look for markets beyond the tyre sector. The industry has been a model example of a circular economy at work. Tyres are almost all recycled or recovered and as we progress the efficiency of our collection and processing improves. There will come a point where, certainly in Europe, there will be no tyre rubber going to waste However, with the market utilising cement kilns and furnaces to consume up to 50% of ELTs, there is a real need to find other large scale markets such as concrete, rubberised asphalt, and to defend existing markets such as sports infill and sports surfaces.

The call to look away from the tyre market was not unchallenged though, and Wilma Dierkes believed that there was the potential to produce high quality rubber materials that would be accepted by the tyre industry. Elroy Fimrite went a step further and stated that he believed that there were finite sources of natural rubber, and when the Chinese economy, in particular, was in a position to expand fully, there would be only one solution for the tyre manufacturers and that would be to fall back on recycled tyre rubber materials. 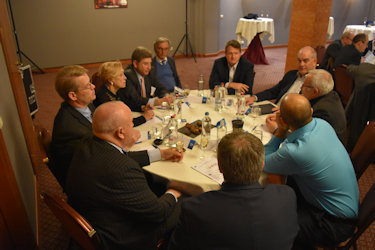 The final speakers of the conference were all from the EC and presented on various aspects of developing projects. This included some detailed information on accessing Horizon 2020 funding and how then to develop ways of commercializing Horizon 2020 projects beyond the initial stages, working with the

The final activity for the 23rd Annual European Tyre Recycling Conference was the introduction of Matchmaking sessions by Dr. Ettore Musacchi. Here those with specific interests were able to meet around a table and discuss the challenges and opportunities they face and come to some idea on the direction required to address the future of the industry.

The planning for the 24th Annual European Tyre Recycling Conference begins in April and as soon as we have the dates we will announce the initial details here on the ETRA website.

We use cookies on our website. Some of them are essential for the operation of the site, while others help us to improve this site and the user experience (tracking cookies). You can decide for yourself whether you want to allow cookies or not. Please note that if you reject them, you may not be able to use all the functionalities of the site.